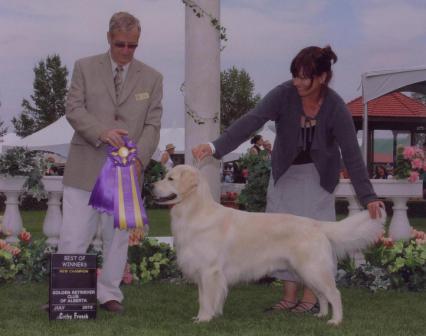 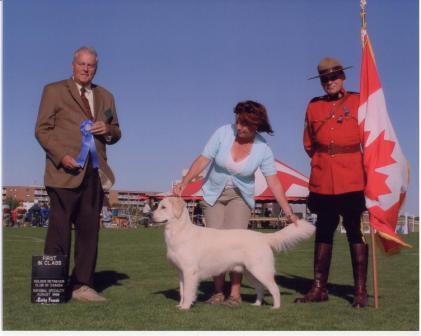 Achievements:
Carlos is littermate to Kenzie, and lives with daddy Charlie and the boys. He recently earned third place in the 6 – 9 month combined sex juvenile sweepstakes class at the GRCC 2008 National under breeder judge Tonya Struble. The next day he looked amazing with Kristi Brack as he won his regular class under breeder judge Howard Falberg. Wow! We have high hopes for young Carlos, and are very excited about this young dog’s future. Thanks Kristi! NEWS FLASH!!! Carlos has points towards his Canadian Championship. He was winners dog at the Battle River Canine Association under judge Mark Houston-McMillan for 3 points. The next day he went Reserve Winners under judge Guy Jeavons. Carlos is maturing into a nice young dog and like his mother is always smiling. He is such a happy boy, and a pleasure to show. NEWS FLASH!!! Carlos was Winners Male at the AKC show in February 2010 2 out of 3 days. He is currently sitting on 9 points. He showed beautifully and is really coming into his own. Way to go Carlos! BIG NEWS FLASH!!! Carlos went Winners Dog and Best of Winners at the GRCAlberta Specialty Show at Spruce Meadows under respected judge Mr Brian Taylor. Carlos showed beautifully and we had an amazing day together. I love this boy! Unfortunately Carlos did not clear his elbows, so despite being so lovely and having OFA Excellent hips, he will not be producing any offspring.

Click back on your browser to see more of our Dogs