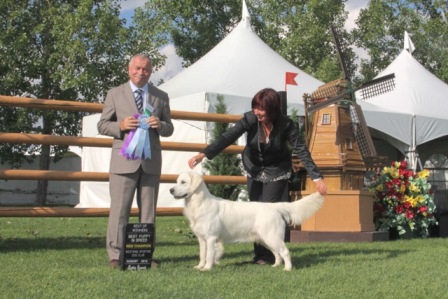 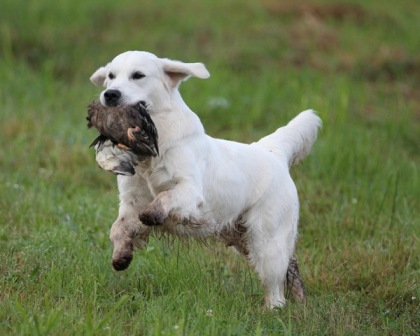 Achievements:
What can I say about Jethro? He is our wee star and I am so excited about him. He was one of three boys from Angus’s first litter in Scotland. I was hoping for a girl, but something about this boy puppy just kept pulling me back. I looked for a co-own home for him, but things didn’t go as planned and he ended up staying with us. It was meant to be. Jethro is quite a character. He is charming, sweet, devilish and a natural born show dog. He enters the ring and takes over, never putting a foot wrong. His first weekend as a senior puppy he won BOW/BPIB at the NACA all-breed show under judge Gloria Geringer for 5 points. The next day, he topped that with a BOW/BPISS at the Golden Retriever Club of Alberta Specialty Show under respected breeder judge Nancy Talbott for another 5 points. I was over the moon! Jethro finished his Canadian Championship while still a puppy and in 2014 became a Canadian Grand Champion. 2014 was a great year for Jethro. He was awarded Select Dog at the Canadian National under breeder judge Ken Matthews (Chuckanut) which qualifies him for Crufts 2015. Jethro has matured into a beautiful young dog. His Working Certificate (WC) proves he is indeed a “retriever” dog. He recently earned his rally novice title as well. But agility is his favourite thing ever! He loves it! Jethro has his hip, elbow, heart(echo) and eye clearances and is available at stud to approved bitches of suitable quality. He has a few litters on the ground and his first born baby girl recently finished her Canadian Championship at the tender age of 11 months old. She is following in her daddy’s footsteps!

Click back on your browser to see more of our Dogs.